Alan proposed on the rooftop of a skyscraper in Bangkok, whilst celebrating Emma’s birthday. We were living in Thailand at the time and were coming to the end of my contract at work. Who knew we would be returning to the UK as an engaged couple!

Since we had been living in such a hot, dry country for three years, returning home to get married was the most important thing in the world to us and wanted to share our day with the people we missed the most; our families and closest friends. We longed for an outdoor wedding to embrace the beautiful English countryside we had missed so much, particularly Herefordshire. As a bonus, we really wanted to incorporate the feature of a charming Manor House but simply could not find the right place. That was until one of my nearest, dearest bridesmaids to be suggested Burton Court. It was a dream come true! 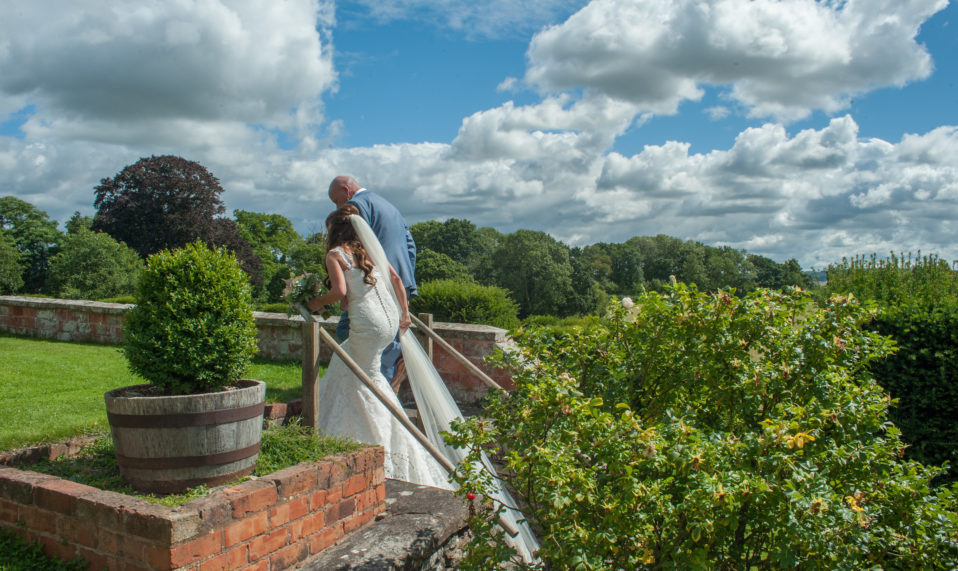 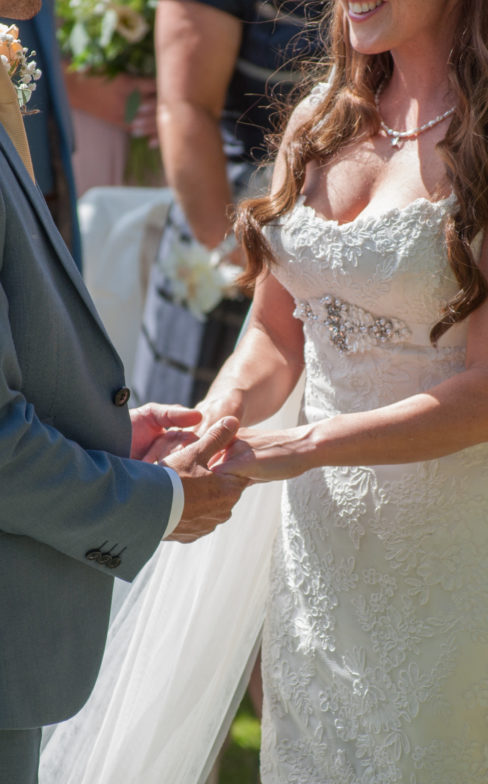 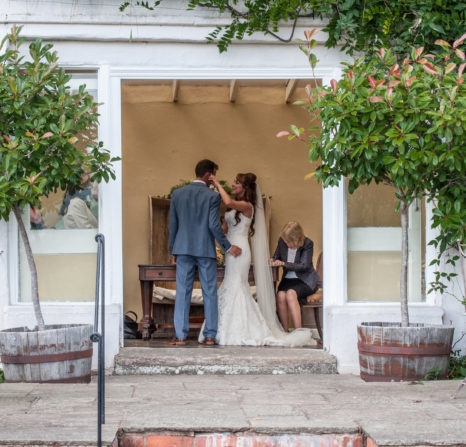 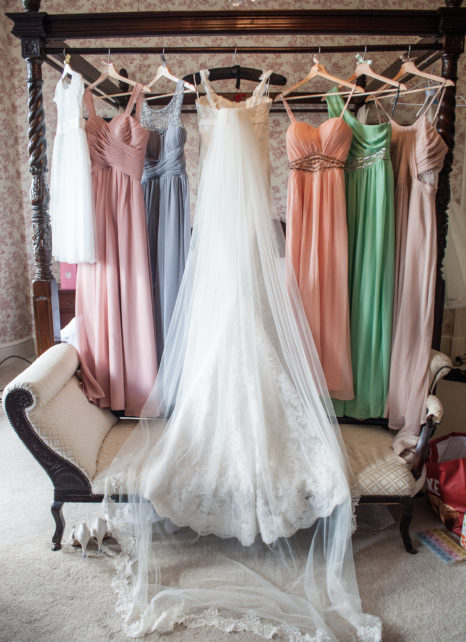 As a couple we love nature and missed the English countryside after living in Thailand. We dreamt of the eclectic shades of the green, luscious pastures of Herefordshire. When visiting Burton Court we found a spot in the gardens that was perfect to have the outdoor ceremony. It was an area that Edward says he uses for the open air theatre productions.

Music is highly important to us and something that is prevalent within our daily lives. I walked down the aisle to 'Radiohead - I promise', a song that Alan and I chose several months before the wedding. The bridal party entry worked so well as we surprised everyone by coming up some concealed steps in the gardens. Alan's sister's husband, designed and built a magnificent oak arch for the Ceremony. He works at Heritage Oak Frames and made it bespoke for us. It was the most beautiful wedding present to us. It is engraved with our names and is now a feature in our garden at home! The weather on the day was being so good that after the ceremony and confetti we could go straight through to a drinks reception out in the gardens. We love prosecco, as did the majority of our guests. The drinks reception flowed well with photographs and garden games, like croquet, that got competitive!

Edward organised drinks for after the ceremony, as well as an amazing cocktail bar for the evening party. We chose our favourite cocktails and they went down a treat, providing an alternative to the more regular drinks served at the main bar.

We booked up a T2 VW Camper van for Alan and his Groomsmen to arrive at Burton Court in. They all stayed overnight in his sister Samantha and her husband Robert's beautiful cottage in Dinmore, where Al sat and wrote his speech at 6am on the morning of the wedding! ... was the very talented Louise Roberts of May Rose Floral Design, Hereford, also Alan's cousin. We seemed to have flowers everywhere by Louise, inside and out! We loved the flowers on the staircase, the urns outside for the ceremony and the pom poms decorated around the trees was a lovely touch. 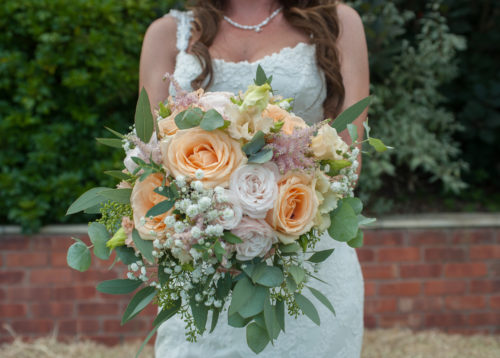 My bouquet was wild and rustic in style, something I had in mind from day one. Louise designed the bouquets following the soft, natural pastels featured throughout -  Peach Avalanche Roses, Pink Ranunculus, Peach Lisianthus, Pink Veronica, White Astrantia, Astilbe, Nigella, Gypsophilia, Eucalyptus mixed with foliage and ferns; all wrapped with hessian & twine. 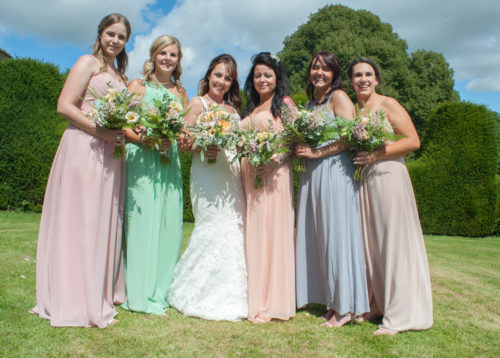 I had five of my VIPs - my sister Rachael, my two besties Emma and Emma (one from Birmingham, the other from Hereford), Alan's sister Samantha, and my brothers fiancee Jennie. I had my niece Evie as a flower girl and my two nephews were pageboys. We're not religious but I wanted the boys to have a significant role on the day.

We wanted different colour dresses, but all following the pastel theme. Oddly enough, a B&Q colour card did the trick! Mint green, peach dusky pink, taupe, and grey. Free reign on designs, as I wanted them to choose something they could wear again. The girls opted for their own hair styles too following general 'hair up and down' theme. All the bridesmaids wore gypsophilia in their hair that Louise, the florist, cleverly made with combs and grips.

The dresses were from Asos, John Lewis, Lipsy at Debenhams, and Little Mistress. I also bought bridesmaids presents of earrings, made by Leoma Drew. We had three-piece-suits from Slaters in Birmingham, after the boys spent the day together to decide. Al had a gold tie and pocket square, whilst the rest of the Groomsmen wore baby blue. 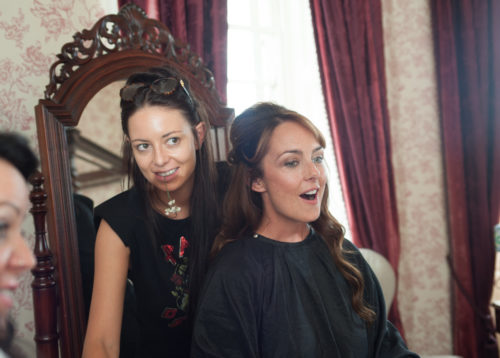 Sticking with the same theme as the Bridesmaids, I went with a similar style of half up and half down. I could not quite grow my hair long enough in time, so I went to Sophia Raptis of 'Hair Extensions Hereford' for a little help. The highly regarded hair stylist, and good friend, Elle Martin did my hair as a wedding gift, whilst mobile stylist Rachel Maddox did everyone else's, starting at an early 6:45am! 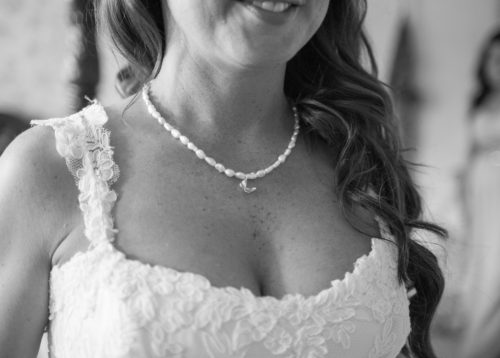 Leoma Drew - earrings as gifts worn on the day by all the bridesmaids, and a necklace that I wore, which was on loan. 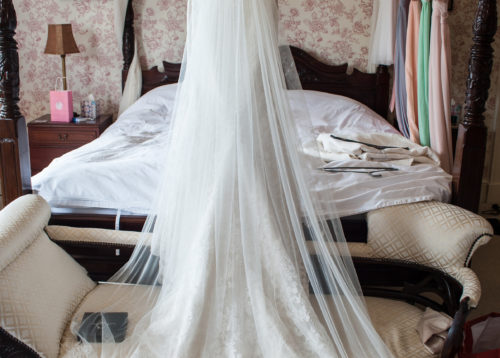 I always had an idea of the type or style that I wished for, but went to one bridal shop in Wolverhampton with my Mom and sister to have fun trying on different shapes and styles. I knew I wanted a fitted lace dress with a fish tail, but did not think I would ever find something so specific. Upon my second visit to a bridal shop with my sister I was lucky enough to find 'The One'. It was exactly what I was looking for and almost too good to be true. The dress was initially strapless, so I customised lacy shoulder straps from the offcut alterations to add a little modesty. I never thought much about trains, but after trying on something wonderfully detailed and long, I had to have it. I felt amazing wearing my dress, especially with the Tiffany diamond earrings Alan surprised me with on the morning of our wedding. We wanted to have a rustic theme, with a strong empthasis of hessian and lace with pastel colours. My friend Sarah created amazing invites, after she and I discussed the ideas I had swirling around my head. I particularly liked the 'cassettte' style RSVP, where guests were asked to request songs in order for us to create a special playlist, which was then played as background music during the day.

My bridesmaid Emma helped me create our table plan and went straight ahead with producing them. Al and I made a lot of things ourselves, utilising pallets, wooden offcuts and jam jars for table decorations. A lot of the hessian we used was donated from a friend and I bought the lace from the Birmingham indoor Market as we needed quite a lot! Edward also helped with this as we were a little short on the day. Thank goodness! I asked one of my bridesmaids' mums (Mommy T) to make a 3 tier naked wedding cake in vanilla and raspberry, it was delicious! We also had gluten free chocolate brownies made by an ex-student, who has started up a small business Yummy Scrummy. Certainly the best brownies I have ever tasted! In our minds, we wanted to go for a 'Game of Thrones' style banquet for the wedding breakfast. Edward thought it would be a good idea to use the Great Hall for this, which we did after initially considering a marquee. We were so glad to go with the Great Hall idea, the medieval hall looked incredible and it really added to the look we envisaged. We decided to go with an alternative approach and went with Rob Farrell at Vousphotography.com. We wanted much more natural photos that caught people off guard rather than the regular staged pictures you see so much of. We're not huge fans of posing for pictures, where you see smiles looking somewhat awkward at points. We really wanted our pictures to be caught 'in the moment', which we found so much more genuine. We didn't even realise that Rob was there, which I guess could class him as some sort of papparazzi! The evening was important to us and we wanted our guests to have a really good night.. We had Greg Bishop's band Busk Until Dawn play an amazing set that got everybody on their feet dancing right from the first note! Other touches included... a basket of flip flops, which were greatly appreciated throughout the night, a sweet cart sourced from my new Mother-in-Law via the Bay Horse Inn and the super fun My Photobooth, which provided a lot of entertainment throughout the night! Burton Court was recommended by one of my bridesmaids, Emma Turner. After visiting the Court itself and the getting the 'feel for the place' it felt right to have our wedding there. After meeting Edward and Helen we felt that they were incredibly friendly, hospitable and accommodating, especially with my family from Birmingham. They were so creative with ideas and flexible with the things we really wanted i.e. getting married outside. Being in their company felt like that of a family, which added warmth and depth to the atmosphere. Both Edward and Helen's calm and positive approach truly settled the nerves, especially since I arrived late to the ceremony!

Alan and I stayed in the bridal suite and toured the grounds the next morning when we woke for the first time as a married couple. We reminsced the whole day during our walk as Edward and Helen made an incredible gut busting breakfast for all. Like what you see? Get in touch for a viewing of Burton Court to see what we can do for you.