Like many great houses Burton Court has evolved over the centuries into what it is today. Mentioned in the Doomsday Book the Manor of Burton (literally means fortified dwelling place) has a long and fascinating history stretching over the last 900 years.

Burton Court has been mentioned in the intermittent skirmishes between the English and Welsh since medieval times. It was here that Henry, Prince of Wales (later Henry V) stationed his troops to watch over the movements of Owen Glendower in 1402. More recently Queen Mary had afternoon tea here with Lady of the Manor and didn’t take her gloves off when eating her cucumber sandwiches.

Architecturally Burton Court is varied with influences ranging from Norman, Medieval, Regency, Victorian and Edwardian periods. The Norman influence is noticeable in parts of the cellars and also on a large archaeological dig in the grounds that has been ongoing here since 2000. We have since amassed the largest medieval pottery collection in the county. We are still waiting to prove if we have the remains of an earlier castle settlement.

The centrepiece of the house is the spectacular 14th Century Great Hall; a remarkable survivor of medieval architecture that dates back to 1330. The room has been described as the finest of its type in the West Midlands. The Great Hall was used as a Court of law for centuries, hence Burton Court. Oddly enough the court rolls in the 17th Century state that people were held to court for not doing enough archery practice!

In the 17th Century the Brewster family were in residents at Burton Court. They were the leading experts in herbal medicine and apothecary at the time and extended around the Great Hall with fabulous Regency rooms. They bequeathed a magnificent collection of books to All Saints Church, Hereford, where they formed the famous chained library, now housed in Hereford Cathedral.

After the Brewster dynasty came the Clowes family who bought the estate in 1865. The Clowes family extended the house with a large Victorian servant’s wing to house 23 court staff. The much admired architect of Portmeirion, Sir Clough Williams-Ellis, has also left his stamp on the building by redesigning the Eastern façade in 1912.

The gardens have a mainly Arts and Crafts influence with reconstructions done in 2005 when we first started hosting weddings. This work was carried out through the royal commissioned garden designer Simon Dorrell with much research into how the gardens looked like during the Edwardian hey day of the house. A fusion of a soft colour palate of whites, pinks, reds, lilacs, purples and blues has been planted that is very easy on the eye.

For more extensive details on the history and archaeology of Burton Court then follow the links below.

Some History of Burton Court

In 1091 King William II [Rufus] gave all the lands held by the Crown in Herefordshire to William de Braose of Bramber, Sussex. De Braose brought with him a Gilbert de Sancto Audoeno (St Owen), granting to him various lands. These included the site of the present day Burton Court, which became the administrative centre of Burton, a name which reflects a settlement in this area in Anglo-Saxon times.

The St Owen family continued as Lords of the Manor at Burton, holding first of the de Braose, and then after 1247, of the Mortimer family of Wigmore. The Court Rolls start from October 1331.

After a remarkable succession of deaths of male members of the St Owen family between 1399 and 1404, the Manor of Burton passed by marriage to the Downton family some time between 1405 and 1422. Then, again by marriage, in circa 1447 Burton passed to the Cotes family when Elena Downton, heiress of Thomas, married John Cotes. The tenure of the Cotes family ended in 1641 when Burton Court and Manor were sold to Henry Hyet and others.

After very confused circumstances in the Civil War/Commonwealth period, Hyet and others sold to John Brewster in April 1662. 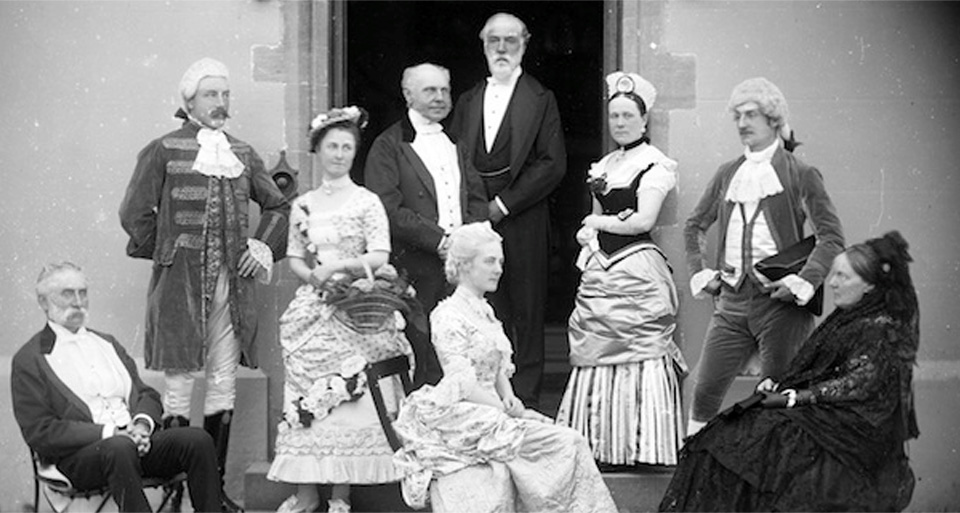 The last John Brewster of several died on 30th November 1804, leaving two daughters as heiresses. The older one, Margaret, had married William Evans before her father’s death. Eventually the Evans family had full title (the other Brewster sister died) and held the then Burton Court Estate until 1863 when it was sold to John Clowes of Broughton Hall, Co. Lancaster.

After a distinguished Army career, John Clowes died in 1925, leaving his widow as sole owner. Their only child, Warren Peter Clowes, had been killed in action in France on 30th March 1918, aged 20 years. Mrs Clowes died late in 1949 soon after which the Estate was broken up and sold in lots.

The building has seen many alterations over the centuries. The earliest record of these relates to 1837. More recently, in 1865, John Clowes had the building “Victorianised” under the supervision of architect F.R.Kempson. This probably included the opening up of the Great Hall, which is thought to have previously had a mezzanine floor. Then in 1912 Kempson’s work was considerably altered by Clough Williams Ellis, so producing the building seen today.

Like what you see? Get in touch for a viewing of Burton Court to see what we can do for you.